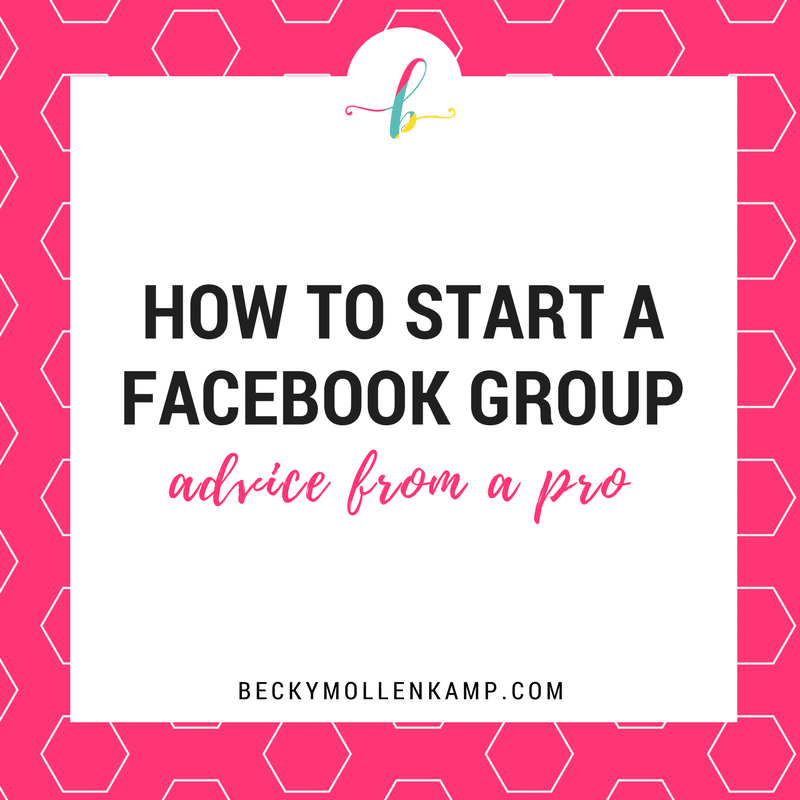 This is the second in a series of expert interviews. Don’t miss the first: A Q&A with Amy Northard, the CPA for Creatives.

Everyone seems to have a private Facebook group these days. I’m in a ton of them, and some are amazing…but there are a lot that are just plain awful. So what sets the great ones apart from the rest? And just how do you make sure yours isn’t one of the crappy ones?

I decided to turn to the moderator of one of my very favorite groups, Think Creative Collective, for answers. I met Emylee Williams about a year ago. She reached out to me after I was really active in the group for a few weeks. That had never happened to me, and it certainly left a good impression. I think she and her co-founder, Abagail Pumphrey, are the real deal. They provide insane value with everything they do, and their group is a fine example of that.

If you’re thinking about starting a group or are running one that’s struggling, pay attention. What Emylee has to say here is on point. She knows her shit, and I feel honored to get to share this advice with you.

Q: Tell me about how you started your Facebook group.

A: We created it in March of 2015 just so we could secure the name in case we ever wanted it. We didn’t market it at all for the first few months because we weren’t sure how we’d use it. After about five months, we made it part of our onboarding funnel, giving access to anyone who signed up for a course. We didn’t add the daily prompts until the beginning of 2016.

A: It’s one more platform to microblog and to connect with our people. We don’t get a lot of comments on our blog posts because I think those are dying down these days. A lot of relationships are built through comments, though, so that conversation could be moved over to the group. The group was also good for webinars because we could tell people to go there if they had questions. It’s a lot easier to respond there than through a lot of emails or calls. Plus, everyone else can provide feedback. That’s a great way to add more value.

Q: Your group grew from about 700 people when I joined in early 2016 to 8,100 a year later (and probably much more by the time my readers see this). How do you account for the rapid growth?

A: We’ve seen growth spurts for two reasons. The most recent has been word of mouth. So many of our members have at least one friend in the group. Before that started happening, the growth came because the group was part of our incentive for signing up for anything. Once people got there, they saw that we hang out there. We comment, we start conversations, we provide value. We market it as an opportunity to get free coaching from us. We don’t say that lightly. Time and time again we’ve actually shown up for our people there, and that starts to get out. It ends up not just being another group; people get value from it.

Q: What mistakes did you make in the beginning?

A: When we started the group, I had notifications on my phone. I’d find out every time someone commented on a thread and I’d respond. It took so much of my time. As it grew, I had to dedicate set times to be there because being there at all times was stressing me out and making me resent the group. When it’s built into my day, I’m able to spend more time and craft better answers instead of being hurried.

Q: What’s the biggest mistake you see others make when starting groups?

A: Not making time for it and not really adding value by showing up and answering questions. If you cannot be there, then it’s literally just white noise. You really have to be present. It takes a lot of freaking work once it is growing to monitor the conversations and making sure the right people are in there and the wrong people aren’t. It’s keeping an eye on conversations and making sure it’s a safe space for everyone. How will you handle it when it’s 1,000 people, and then 10,000 people? I’ve seen people shut down big FB groups because they can’t handle it anymore.

Q: How do you recommend someone go about starting a group?

A: If you don’t know if it’s right for you, I recommend the path we took. Add it as a free bonus for whatever you sell. Treat it as a beta test to see if you like having a Facebook group. This will help you learn how much time you want to spend and what doesn’t and doesn’t work. Start small. We had five or seven people at first. Use the first people for market research. Be there, answer their questions, and really engage.

Q: What about tips for growing a new group?

Once you have a better idea of what you want to offer in the group, trickle it out like you would anything else. Write a blog post about it, put a link in your Instagram bio. Tell people what they can expect from you. It takes time, but it’s like a snowball. Keep showing up even if only one person comments or no one comments. That happened to us for a long time. People lurk, but they’re still seeing it. Be real and helpful and add value, and just keep doing it and talking about it. Once we hit 1,000 members it started to flow in a lot faster. Enjoy the intimacy while you have it because if you’re actively trying to grow it, it’s going to grow and change.

Q: What’s are your best tips for people who are joining your (or any) Facebook group?

A: Stop lurking. Read the rules, follow them, introduce yourself, and speak up and get noticed. Even if there are thousands of people, if you choose to speak up and add value in comments, you’re in the minority. You’re one of a very select few who do that. If you want the attention from the moderators or others in the group, you have to speak up. People think their voice is drowning because there are thousands in the group, but less than 100 are probably active. We’ve hired people and collaborated with people just because they’re active in the group. You have to do it over and over again, but if you’re doing it in a way that provides value to the group, you’ll get noticed.

Learn more about Think Creative Collective on their website, or follow them on Facebook, Instagram, or Twitter. Also, you should seriously consider signing up for one or many of their amazing courses, such as Trello for Business or The Follow-Through Method. I’m not sure anyone in the creative infopreneur space is providing as much value for the buck as these ladies. And I’m not an affiliate—I just truly believe Emylee and Abagail and what they’re doing for others.