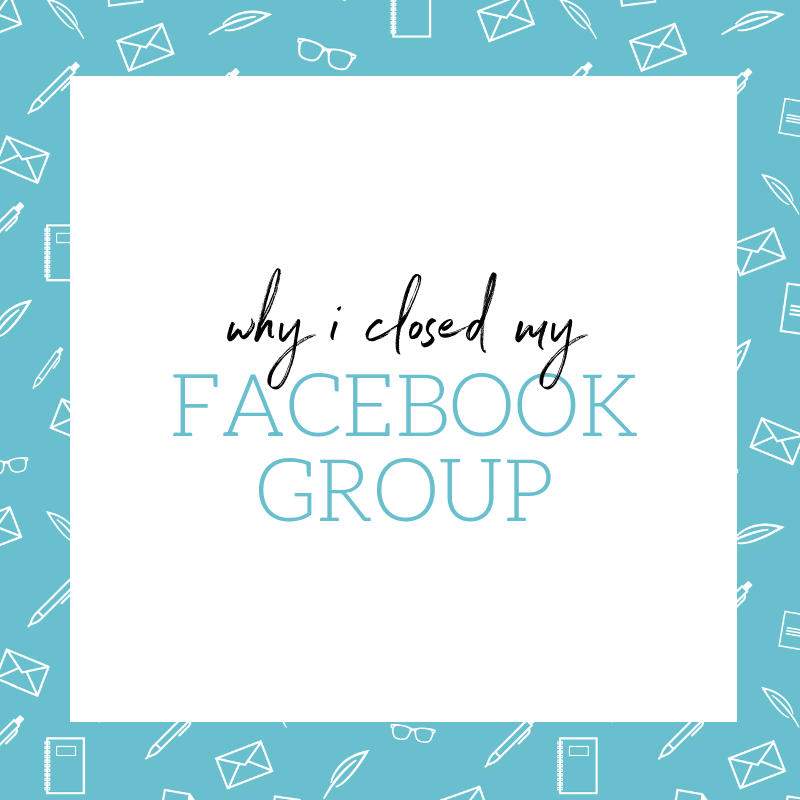 In February 2019, I archived my Facebook group. I felt equal parts fear, sadness, and relief.

I started the Own it, Crush it (OICI) community in late May 2017 with no real idea of what it might become. I just knew I hadn’t found a “home” in the many groups I’d joined, so I figured I’d create it.

OICI was everything I’d hoped—a safe space for women business owners to share, learn, and grow. It was a positive group, free from judgment, constant sales pitches, and hype. It was a cozy corner of the Internet, and so many members told me it was their favorite business group.

The group grew quickly, going from zero to 700+ members in about three months, and it reached 2,300 by the time I closed it. That’s a large audience to just walk away from, so why did I do it?

The truth is, the group was simply no longer serving me or my business.

For a long time, the group served as a gateway to my brand. It was how most people learned about me and ended up on this email list. It was also a great space for me to promote my services to an audience of people who were eager to hear from me.

Also, the community fed my soul. It wasn’t just a safe space for other women—it was also where I turned to ask questions and get support.

Over time, things changed. In the last six months, I noticed a major shift.

It was so hard to admit to myself, but there was just very little reason left to keep the group going.

It felt so selfish to entertain the idea of closing it down. People still loved and used the space. Shouldn’t I keep it alive for their benefit? But the truth is: I have limited time and a small budget.

As much as I love to do things for others, I also need to be mindful of my own bottom line.

I could no longer justify spending time in the group (and money for my VA to help) when the return on investment had dwindled to nearly nothing.

Others suggested enlisting more help from moderators, which I had been doing for months, but the problem was actually bigger than time and money. The group had also become less engaged in recent months, due in large part to my own dwindling participation. I didn’t want it to fizzle into a sad shell of its former self because the space is a reflection of my brand.

So, it was time to say goodbye. My internal critic started saying things like, “only an idiot walks away from 2,300 potential buyers,” and “without this group you’re nothing.” But I did it anyway because I ultimately I knew it was the right thing at the right time.

The days since have been quieter and more relaxed. I can focus more energy on my membership community and my 1:1 coaching. I still have moments of panic (did I do the right thing? how will I ever sell anything again?), but mostly I feel at ease with my choice.

If you were in the OICI group, thank you. Truly. You helped create incredible memories for me. The year and a half I ran that group will always be one of the best times of my life. I hope you’ll stick with me as my brand continues to grow and evolve!