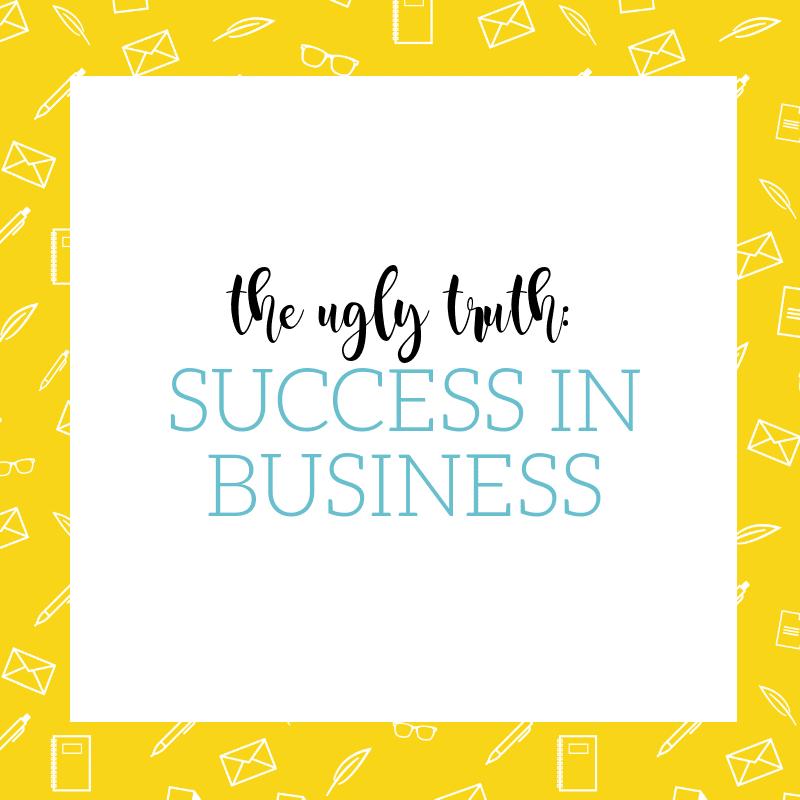 Last week, someone in my VIP membership community asked about how to succeed in business. She bravely shared that she’d made zero Black Friday sales and was generally feeling completely defeated.

“This is getting too exhausting. I haven’t made money in months and it’s killing me.”

She said she’s now second guessing every decision she makes, and she’s even beginning to think that maybe people just don’t like her.

The post broke my heart … and it made me mad.

I’m mad at the online “gurus” who contributed to her feelings. They clog our newsfeeds with “easy secrets” for five-figure launches and six-figure businesses and growing a massive following. They tell us they know how to succeed in business and make it seem oh-so-simple.

Here’s the truth. It may not be what anyone wants to hear, but I think it’s what everyone (especially this amazing woman in my community) needs to hear:

I’m sick of people trying to sell the bill of goods that you can somehow skip ahead in line if you just learn their handy, dandy secrets.

I’m even more sick that I’ve seen behind some of those curtains and now realize that many of these same people fail to tell you that their “7-figure business” is based on gross numbers and they actually clear something far less. Or that the “5-figure launch” they’re hyping cost $5,000 or more in Facebook ads. Or that their “overnight success” came because of a total fluke viral post or because they were an early adopter of a now-overrun social media channel.

Very often, with a little digging, you discover the truth isn’t as simple as the promise.

If you’ve ever done home repairs, you’ve probably heard “you can have it good, fast, or cheap — pick two.” The same is true with business.

The first time, I spent 6 months planting seeds for and saving money to float a freelance writing business while I was still working full-time. Then I spent another 6 or more months relying on my savings as I actually grew the business after leaving my 9 to 5.

The second time, I spent 6 months laying the foundation for a coaching business while making 100% of my income from my writing business. This year, I began to make money from coaching but I’m still doing writing work to sustain myself financially.

As I shared with my membership group, less than half of my income this year came from the work I really want to be doing (coaching, community, and courses). By the end of next year, I hope to be making almost all of my income from this new venture.

That’s not glamorous, and it certainly isn’t the stuff of flashy Facebook ads. But it’s my truth, and the truth of so many other successful business owners I know.

Why am I sharing this today?

If you feel that way, take a deep breath and know it’s normal. Then, silence the voices that are adding to those feelings. They aren’t helping you and, more than likely, their “secrets” about how to succeed in business won’t either. Finally, find yourself a business community that is built on truth and support.

Surround yourself with others who “get it” and who are willing to share the good, bad, and ugly of owning a business (not just the Instagram-worthy highlights).

You can build the business of your dreams. You can get rich from your special gifts and talents. But if it takes you more than a few weeks or if the “3 secrets” don’t work for you, that doesn’t mean you’re a failure. It means you’re normal, and that’s okay.

Good, fast, or cheap—which 2 are you choosing? Comment below and let me know!

This site uses Akismet to reduce spam. Learn how your comment data is processed.