Rethinking “The Model” as an inclusive feminist

The traditional self coaching model can be unhelpful and even harmful. Find out why, and how I’m changing it as a feminist life coach.

It’s time to re-think the basic self-coaching model from an intersectional feminist perspective.

[Bonus reading: What is a Feminist Coach?]

There are many versions of self-coaching models, but the most common are those based on cognitive-behavioral therapy (CBT).

At its most simplified, the concept behind these models is that how we think affects how we feel and how we act (or, our thoughts determine our feelings and our behaviors).

This thought-processing model was popularized by Brooke Castillo of The Life Coach School. She calls it “The Model” (or the CTFAR model). Her version and traditional CBT models are basically the same, and simply represent different ways of interpreting a concept.

A few years ago, Castillo got into some hot water—and rightfully so—for The Model. In the wake of George Floyd’s murder and the awakening to systemic racism that happened for so many white people, she made the mistake of saying that all circumstances are neutral—including racism.

Unfortunately, she was simply repeating the way the traditional self-help model has been used in the self-help space.

Change your thoughts, change your life is an oversimplified—and extremely privileged—position.

I want to look at the same model and change how we interact with it to more compassionately and realistically help ourselves in any situation. It’s time to rethink “The Model.” 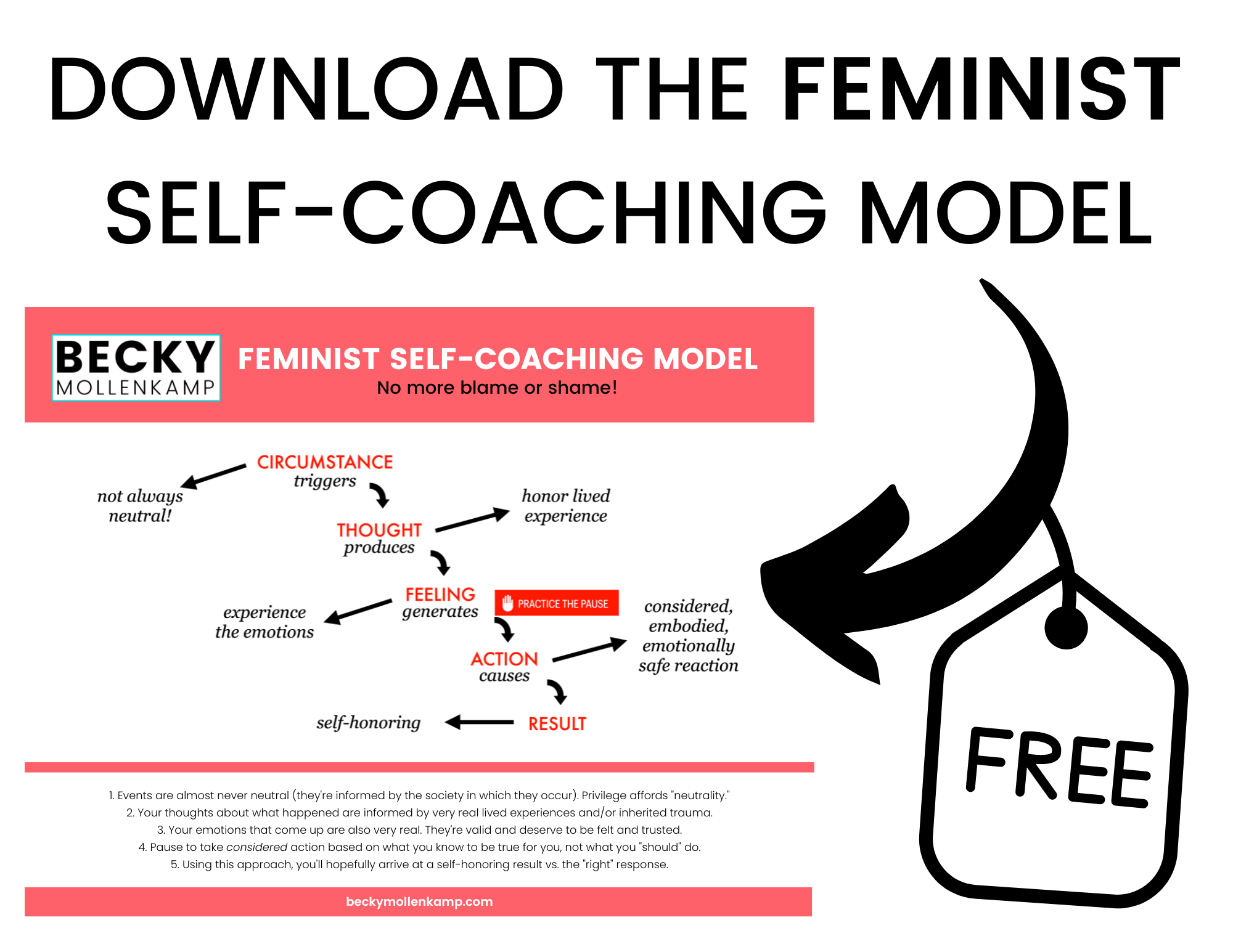 The traditional self-coaching model says that there is a circumstance (and, as Castillo once said, that circumstance is neutral). You will have a thought about that circumstance (an opinion based on your own experience), and that thought will dictate how you feel. Your feelings about will determine how you react, and those actions will lead to results.

So, the results you see in your life are directly linked to the thoughts you choose to have about any given circumstance.

If you’re using “The Model” for something like someone cutting you off in traffic, it may be easier to see how this model makes sense. Being cut off by another car might seem neutral. You don’t know the driver or what made them cut you off.

About this circumstance, you might think, “that guy is a jerk!” or you could think, “I hope he’s not rushing to deal with an awful emergency.”

If you think he’s a jerk, you’ll probably feel angry and that may cause you to act rude by chasing after him to flip him off. The result of that could be a potentially dangerous road-rage event.

If you think he’s dealing with an emergency, you’ll probably feel empathy and that will cause you to slow down and let him go ahead without incident. The result is probably that you remain safe.

In this scenario, you can see how your thoughts may directly affect the results of a seemingly neutral event.

The Problem with The Model

Things like racism, sexism, abuse are not neutral. They are objectively wrong and bad.

But even a guy cutting someone off in traffic is not neutral. That’s because nothing happens in a vacuum, isolated from the world in which it’s happening. You can’t separate the act from the person perpetrating or the person experiencing it.

The thoughts and feelings that woman has about being cut off will necessarily be influenced by her past experiences with aggressive white men.

That doesn’t make her thoughts wrong, even if this specific man happens to be rushing to an emergency. She doesn’t simply need to change her thoughts to change the outcomes.

She has been harmed by white men, and this is a white men doing something potentially threatening. Her lived experience will affect her thoughts—and may well be the thing that has kept her alive this long.

Under the privileged (and harmful) self-coaching model, though, she would be made to think she needs to change her thoughts. She would have to deny her lived experience and force herself to see the action as neutral and instead believe the best of him, even if everything in her body says he may be dangerous.

The model doesn’t allow for listening to your lived experience or your embodied response. And that is deeply problematic.

As an example, you can change your thoughts about that guy in traffic, but it won’t necessarily change your emotions. Your emotions are an embodied, automatic trauma response based on what’s happened in the past.

It’s simply not always true that you can change your thoughts to change your feelings and actions to positively affect your outcomes.

There’s nothing inherently wrong with CBT or self-coaching models based on CBT. Used well, they can be extremely helpful.

The problem is when they are twisted into the privileged idea that all circumstances are neutral, and your life is simply a reflection of what you allow yourself to think—and then feel—about the world around you.

An intersectional feminist approach to self-coaching models isn’t radically different. It starts with the same basic circumstance> thought> feeling> action> result concept. What’s different is how we use the model.

➡ First, and most important, everything is not neutral. In fact, things are almost never neutral.

Don’t fall for the fallacy that everything is neutral and the reason you aren’t at peace all the time is because you failed to see things as neutral and control your thoughts accordingly.

In fact, that is the fundamental flaw with the traditional self-coaching model when it’s used to teach that circumstances are neutral. It starts with blame and shame.

If you have bad outcomes, it’s your fault for not changing your thoughts (blame). Eventually, that makes you feel like there’s something wrong with you for not being able to easily change your thoughts (shame).

➡ Second, you will have a thought about the circumstance and it is an opinion informed by your lived experience, inherited trauma, and cultural conditioning. But that doesn’t make it wrong or bad.

It’s important to honor your past, your inner knowing, and your circumstances.

Don’t allow others make you feel bad for that, especially if those are people with immense amounts of privilege. The truth is, their thoughts about a circumstance are also affected by their lived experience—it just happens that their privilege affords them a very different reality.

So, don’t judge your thoughts as good or bad, right or wrong. Instead, ask yourself what is informing your thoughts and how much of that is outside of your control. Also, check in with your inner mentor to decide whether you can and should trust your thoughts.

Remember to “practice the pause” before reacting.

Acknowledge and examine your feelings—what do they want and need you to know?

➡ Fourth, your actions will be informed by your thoughts and feelings—and that’s also okay. What matters is that your actions are self-honoring and (emotionally and physically) safe. The actions should be borne out of “how do I protect myself?” not “how do I do what is ‘right’?

It doesn’t matter what someone else would do with the same circumstance. Their experience is different, and that means their reactions will also necessarily be different. That doesn’t make one correct and one wrong.

So here is how this revised, feminist self-coaching model looks in action:

Something happens. Check in with your thoughts without judgment and examine what has shaped them in that way. Honor your feelings because they are valid. Pause to consider your options, and then act in a way that honors your truth.

In this scenario, whatever result occurs is one that is self-honoring (except in those rare cases when you truly have no agency, which is well outside of self-coaching).

The goal of re-examining the self-coaching model is that at the end you feel you made a self-honoring choice rather than doing what you thought you “should.”

The old model isn’t self-honoring. It doesn’t leave room for your truth. They are borne out of obligation and use blame and shame to pressure you into making the choices that fit patriarchal precepts. [Read more: WTF is Patriarchy?]

And that isn’t healthy mindset work. [On the podcast: What is a Healthy Mindset?]

I am excited about helping others see and use the self-coaching model in a new way. The basics stay the same, but how we put into use change to help you take considered, embodied, and safe actions to achieve self-honoring results.